Pretty simple story today. Covid is primarily an old persons disease and the elderly population of "at-risk" is in the process of ballooning, thus Covid (or like diseases that might not have even previously qualified as pandemics)...are finding fertile ground among the significantly enlarging elderly populations. 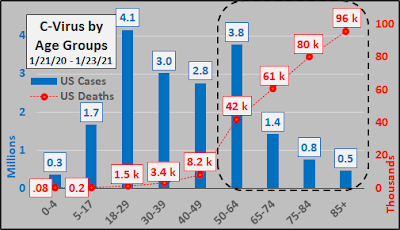 Below, mortality rates by age groups. Again, the older the infected, the higher the risk of mortality while, by and large, the immune systems of the under 50 year olds are statistically nearly always up to the task. 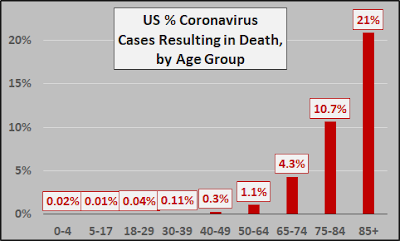 The big point we should be discussing is the ballooning of the most at-risk populations over the last decade and ongoing over the next two decades. According to UN World Population Prospects 2019, the 65+ year old US population is amid peak growth...and the highest rates of growth will be shifting to the oldest population segments of 75-85 and 85+ year olds. These populations will double over the next two decades and significantly higher rates of death will be observed due to this. Even a rather tough flu or mild "pandemic" agent among this population will likely see pandemic-like results. 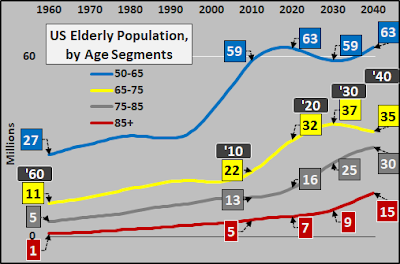 Global View
But we live in a big, interconnected world. Thus, I expand to look at the relatively wealthier half of the world (those living in nations with Gross National Incomes above $4,000 per capita...or a per capita average of about $12,000...data from World Bank, HERE). Immediately visible is the under 50 year old population of those at low risk from Covid (or subsequent diseases) has entered secular decline (green line). Population growth amid this half of the world (including US/Canada, EU, Japan, Aus/NZ, China, Brazil, Russia, Mexico, Indonesia, Colombia, Thailand, Saudi Arabia/UAE, etc.) has now shifted solely to the elderly. This under 50 year old decline is inclusive of ongoing rates of immigration. If immigration slows, the decline of the wealthier consumer nations under 50 year old population will be significantly faster. 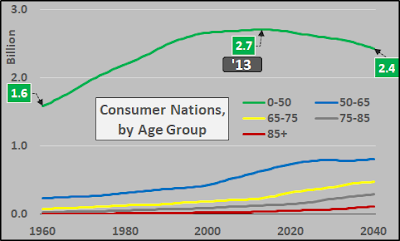 Focusing on the wealthier nations elderly populations, again, the most at-risk segments will see the largest increases in size. Thus, even normal illnesses will have significantly higher mortality rates than previously seen. Even a tough new variant of the flu or new virus like Covid (or Covid mutations) will find multitudes of at-risk elderly with a high likelihood for abnormally higher death rates. 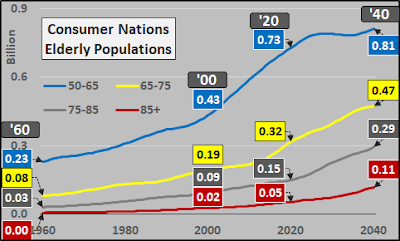 Viewing the population change by age groups over 20 year periods, the current 2020 through 2040 period stands out as something we have never seen. A collapse among the populations of low-risk and explosion of those at high-risk. This must be included in the thinking of what is pandemic and appropriate responses. 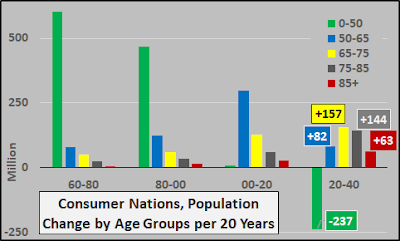 Given these demographics, the big question should be; are large numbers of deaths among the vulnerable elderly truly a pandemic? Reason enough to shut down economies, close schools, saddle young with unrepayable quantities of debt? Are there other means to safeguard the elderly while allowing the majority of the world to remain open? Is Covid a one-off or the beginning of virus' that are mild for the larger population but that will play havoc among the elderly? Are ongoing shut downs and massive increases in debt the appropriate long term response to what is likely a long term problem? Hopefully food for thought.
Postscript: Corona-virus cases, severe cases (hospitalizations), related deaths by age groups in my home state of Oregon (currently in an ongoing lockdown, including schools, restaurants, gyms). 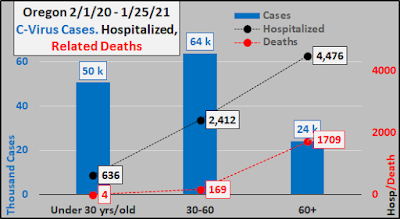 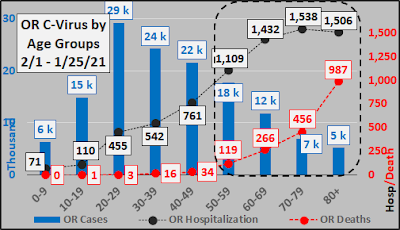 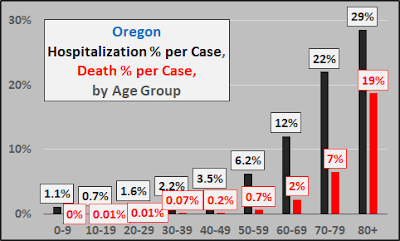