Summary
Coronavirus is no plague or Spanish-flu, but we aren't who we once were either.  So the end result may be the same?!?
The young (representing the future) cannot cover the rapidly growing debt...and the policies to avoid dealing with the debt are ultimately destroying future economic activity.
The US is going bankrupt in half measures but double time.  Global depression is now unavoidable and imminent.
Some thoughts on Coronavirus...
1- The Coronavirus ain't no black plague or Spanish-flu.  Those were true killers that wiped out young and old without regard for the strength or age of the afflicted.  In fact, Spanish-flu was attracted to the young adults above all else.
2- However, Coronavirus has come along when the 1st world is at its most vulnerable.  Never have more elderly been artificially kept alive beyond their natural expiration dates by drugs and our 1st world medical system promoting quantity over quality.  Never has the 1st world been more obese and suffered from more "lifestyle" diseases than now.  Hypertension, Type-2 diabetes, heart disease, smoking / vaping lung related issues, drug abuse, etc.  The 1st world has the best medicine in world history but capacity is limited and the vulnerable hordes will overwhelm our hospitals.  BTW - one of the most vulnerable of populations are the truckers responsible for maintaining transportation...this weak link should be very worrisome.
3- In the end, I suggest a rather middling grade virus will likely hunt the unprecedented number of weak, infirm, and vulnerable and kill on par with real killers of the past.  Meanwhile, the strong and healthy will likely find this like a very bad flu year...but due to the overwhelming #'s requiring the medical system, even many of the strong that would have survived with available care may perish.  While the 2nd and 3rd world aren't nearly as old, overweight, and vulnerable as the 1st world...unfortunately they don't have the medical systems to cope with this and the result will likely be very bad.
And what of the federal response to this pandemic?  It appears disjointed, half-hearted, and entirely left up to every state, city, county, company, and ultimately the individual as to how to appropriately respond...The only sure thing is Congress and the President willing to throw good money after bad.
In 2020, the federal government will spend like drunken sailors...borrowing from our future selves to pay our present selves.  The chart below details the rising public vs. Intragovernmental debt (SS, etc.) against the inverse instigator of debt, the Federal Funds rate. 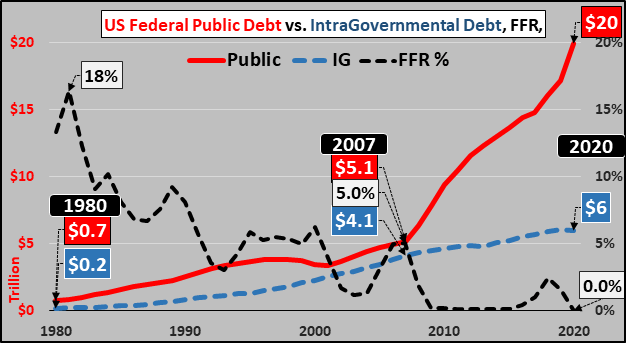 Put in context, below the annual change in the under 60 year-old population (green line) and over 60 year-old population (yellow line) contrasted with the Federal funds rate (black dashed line), and public debt (red columns) vs. Intragovernmental debt (blue columns).  Not so hard to see this is a demographic issue at its core.  Obviously, I'm estimating the 2020 federal deficit to end up around $2.8 trillion of which likely 100%+ will be public debt (little to no IG net purchasing). 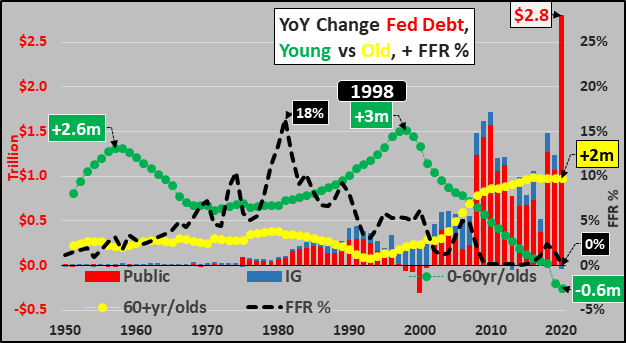 And what will the next five years look like?  The demographics will slightly shift as the growth of the elderly population decelerates but the projection for the under 60 year-old population is a gentle upturn.  But this upturn is highly unlikely as it assumes rising births (births continue declining) and high rates of immigration will return (2019 saw a huge deceleration in immigration due to border enforcement...and now with Coronavirus, immigration may be a net zero) and ongoing strong economic activity (lol).  So, the under 60 year-old population declines will likely accelerate rather than return to growth.  Of course, federal debt will be surging to cover unfunded liabilities, unemployment, bailouts, etc. etc. while Intragovermental funds turn to a net seller. 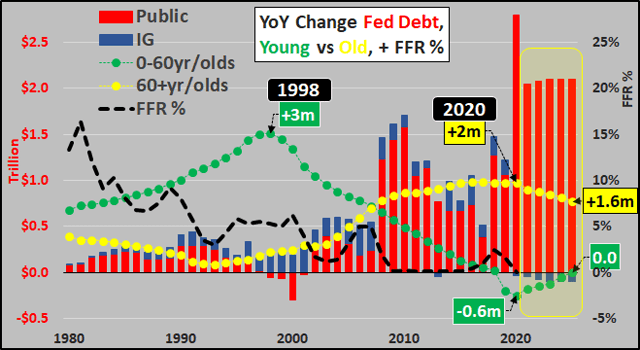 Anyway, this signifies that 2020 will likely be the year that federal debt to GDP surpasses the previous peak set in WWII.  This coincides with the decline in the consumer (and base of credit creation) that is the working age population. 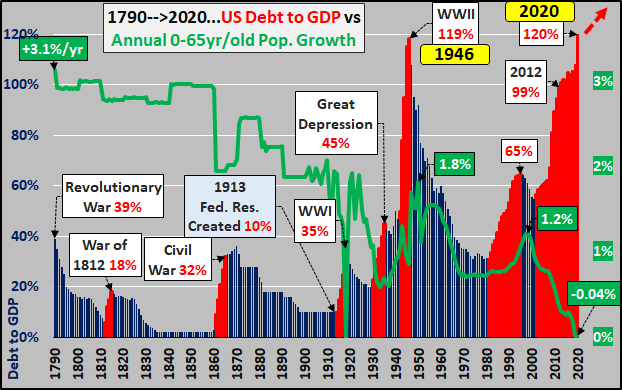 But unfortunately, the debt will continue to blow out against even any modest GDP growth.  The chart below assumes 1.5% GDP growth through 2025 versus constant $2 trillion annual deficits after the 2020 $2.8 trillion blowout.  While the under 65-year old population was projected to return to minimal growth, the Coronavirus is likely to turn that projected growth to decline and further decelerating potential economic activity. 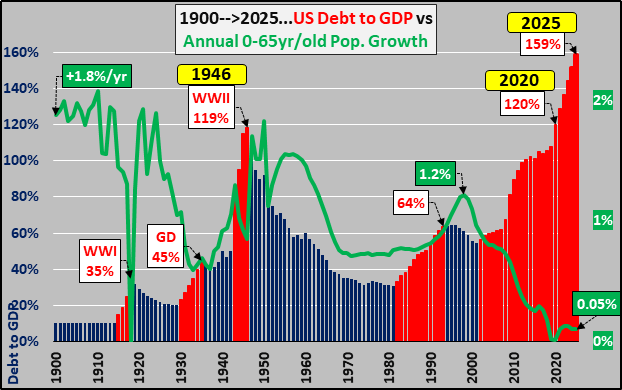 And just to put this debt in context, below I show the relatively constant of under 20 year-old US population (the future that is responsible for servicing the debt) versus the rapidly growing federal debt.

Finally, putting the debt into personal terms against America's future.  While this population is not yet old enough to vote, they are sure to feel the full impact of the debt.  Of course, over the course of their lives, they can never repay the debt nor can they even honestly service the interest payments.  Instead they continue to see Federal Reserve policies rewarding the banks, large institutions, the asset holders, and the elderly.  But this is only federal debt...if we added the soaring unfunded liabilities, you can likely quintuple those per-capita dollar amounts. 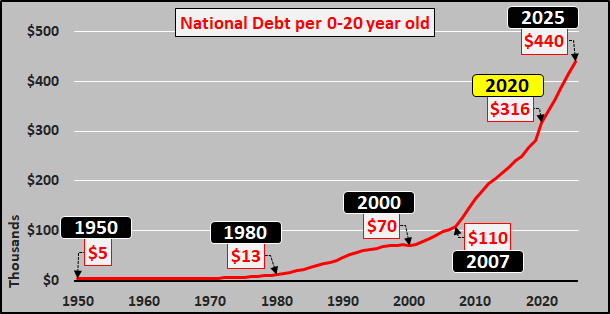 This debt is like an ever heavier weight spread across a population that isn't growing...and eventually the policies of avoidance will crush whatever is under it.


And just one more means to gauge the growth of federal debt against the future, annual US births.  Of course this is inclusive of all births regardless the parents legal or illegal status.

And dividing the debt (present and future liability) against those responsible for this debt (the future adults)...if you don't see the issue here, it's only because you don't want to see it (and this doesn't include the unfunded liabilities that are something like 4x's the size of the national debt and growing just as fast).

Global Outlook
Putting this into the global picture...the chart below is exempt Africa but looking at the annual global change in under 40 year-old females (red columns), over 40 year-old females (blue columns), annual global births (black line), and federal funds rate (yellow line).  Births (x-Africa) have been declining since 1998 and are now down 18 million annually from that peak.  But in 2020, the female global childbearing population (x-Africa) begins declining...and significantly faster declines in births should be anticipated (although they are not).  And all this was before Coronavirus...obviously, the situation will be more acute post Coronavirus.

The chart below of UN population data shows that before the Coronavirus, it just so happens that 2020 was year when the 1st world working age population was set to begin its secular decline.  The population that consumes 70% of all commodities, 75% of all exports, and 80% of all the income/savings/access to credit begins a secular decline.  Africa and Asia (excluding East Asia that is part of the 1st world) are reliant on the growth of the 1st world for their own growth...without 1st world growth, the 2nd and 3rd world economies are set to fall hard.
Post-Coronavirus, the situation will be 2x or 5x or 10x worse.  Global depression is imminent and will continue for an indefinite period as depopulation, deleveraging, and decline are the natural state of things.  Cast off the lifeboats...the Titanic is going down and we'll be in small boats on very rough seas from here on.  This was going to happen eventually, Coronavirus has just accelerated the timeline.

The global demographics behind this, the impact on energy consumption, the interest rates, and why this is inescapable is detailed from UN data (HERE).  I am not saying we don't still have choices, just no happy choices.  We can take actions to avoid worst case scenarios, prioritize the critical over desirable, and prepare for a new and different future...or we can just continue fighting the last war.