Today, the annual issuance of Treasury debt crossed the $1 trillion mark for the 2019 calendar year (likewise crossing over $23 trillion, with two months still to go).  Below, in red is surging public (marketable) debt versus in blue, the slowing intragovernmental (Social Security and other trust funds) debt, and the Federal Funds Rate. 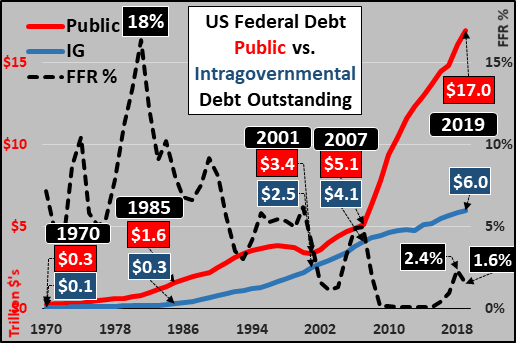 The fact that all that Treasury issuance has come in the last three months should be noteworthy, but heck, the Treasury had some catching up to do after another debt ceiling impasse!?!  Still, over the same period, the Federal Reserve has cut interest rates by 35%.  Over that same period, the Fed has ceased QT, pivoted, and initiated some of the most aggressive QE we have yet seen.  This has increased the Fed's balance sheet over $260 billion in just over two months, since the Fed's pivot of late August.  Over the same period, the Fed has engaged in the most aggressive monetization of debt (decreasing bank held excess reserves against increasing Fed assets) we have seen since the depths of 2009?!?  Suffice it to say, these are not signs of strength or confidence but instead signs of panic.  But why???
For hundreds or even thousands of years, the study of demographics (statistical data relating to the population and groups within it) was a sleepy backwater somewhat akin to watching the grass grow.  So much so that economists no longer bothered themselves with the minutiae involved.  Economists built models (assuming demographics would forever remain static) on the idea that if ever more capital was freed, more supply would be created, and rising demand would consume ever more.  However at this point in time, if you don't understand demographics, then you won't likely understand what is happening and why previous economic theories no longer make sense.  To put it simply, certain populations (wealthier) and certain age groups (working age adults) do the vast majority of consuming and undertake the vast majority of new loans (debt) which pushes the quantity of "money" and consumer demand ever higher.  But today I detail that growth (where it counts) is at an end among the populations and age groups that drive demand.  The net result is the end of rising consumption, rising credit, and the rising growth in "money".

The end of growth in money is due to our fractional reserve system, where something like 10% of deposits are held back and 90% loaned out.  Thus, the vast majority of "money" is lent into existence via banks.  But again, not all customers are alike, as it is the working age adults that undertake the bulk of new loans for homes, cars, education, etc.  Conversely, elderly are generally credit averse and far more likely to pay down or pay off existing loans than to undertake new loans.  This makes sense since the labor force participation rate among elderly is about 10% compared to 80%+ among 25 to 54 year-olds.  Elderly live on fixed incomes and generally live within their means.  That isn't to say that credit isn't on the rise among the elderly, just nowhere near the levels it is utilized by the working age population.  In essence, elderly "destroy" money vs. young who "create" money.  In the right proportions...things lift upward, but in the present and coming proportions, money supply organically collapses.  Enter central banks monetization and synthetic creation of "money".

Global Picture
On a global basis, the chart below splits the global under 65 year-old population in half.  In blue, the under 65 population of nations that make above $4,000 annually per capita (or on average above $16,000 per capita) and those making less the $4,000 (or those averaging below $1,600 per capita annually).  Noteworthy is despite the large inflow of immigrants from poor nations, the global consumer population under 65 years-old will begin declining by 2023 and decline indefinitely thereafter.  All population growth from there on will be among the under 65 year-old non-consumers (or poor nations) and as the next chart below shows, among the non-credit wielding wealthy and poor elderly. 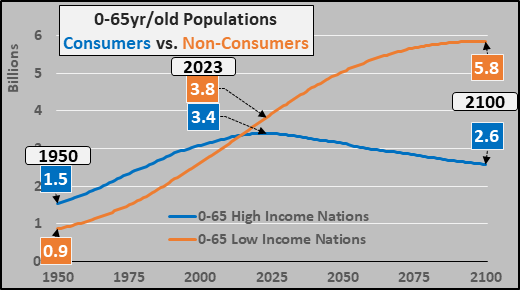 Below, decelerating over 65 year-old population growth through 2050 before the wealthy elderly cease growing, leaving only the poor elderly to rise alone through 2100. 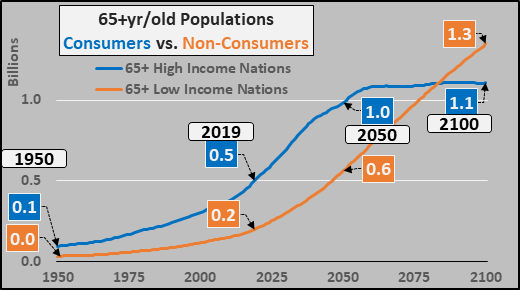 Or a single chart to detail the situation (below).  Despite an influx of immigration, the total births in the wealthier half of the world have declined over 7.5% since 1990 (yellow dashed line) versus the tripling of annual growth among the wealthier nations combined 65+ year-old population.  Simply put, nothing like this has happened in the last ten thousand years...and nothing like this is likely again for the next ten thousand.  Aka, "the demographic moment", the "inflexion point", or the moment where "shit hits the wall". 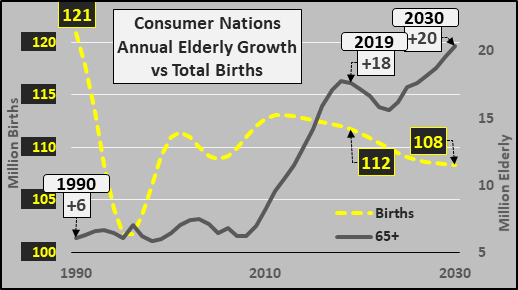 So, what happens to credit creation (and growth of the money supply) when population growth slows and shifts to those least likely to undertake new loans or credit?  Que the Treasury, Federal Reserve, Congress-critters, and president. 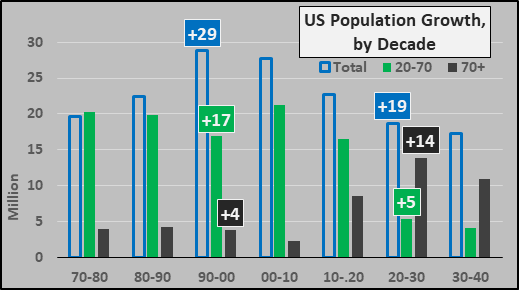 Looking at the annual population growth of the US, by age segments, plus total annual births, below.  The large deceleration of growth among the working age population is plain (blue line) and the tripling of annual growth of the 70+ year-olds isn't hard to pick out (grey line).  The 14% decline in births since the '07 peak is also noteworthy (yellow dashed line). 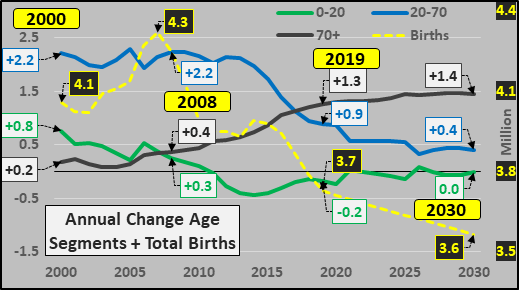 From 2020 through 2030, total population growth slows 20%, and 75% of what population growth remains is among 70+ year-olds...total reversal from previous decades.  Below, looking specifically at the opposite end of the spectrum.  A 14% decline in births since 2007 (yellow line) versus a quadrupling of growth among the elderly population (grey line).  This is also known as an inverting pyramid. 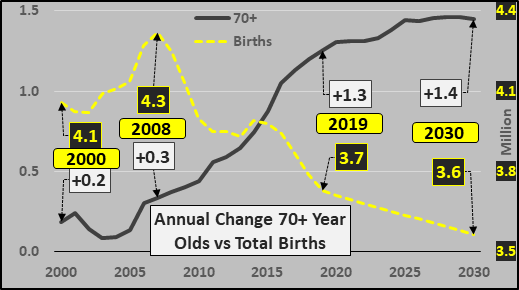 Below, looking at housing starts (blue columns), federal funds rate (black dashed line), and the annual growth of the 0 to 70 year-old (green line) versus 70+ year-old (red line) populations.  The issue is minimal growth among the working age (coupled with full employment among this population) versus a deleveraging elderly population.  An economy primarily driven by new housing and all that orbits new housing (infrastructure, factories, manufacturing, durable goods, etc.) is set to endure little to no organic demand growth (but of course the US federal government and the Fed can follow the Japanese or Chinese models to continue creating "bridges to nowhere" and "ghost cities" to perpetuate the inevitable). 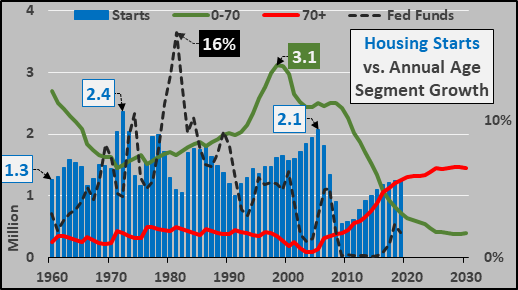 What does this mean?  This should mean that the growth of the money supply lags significantly or doesn't grow at all.  The population that typically utilizes credit is growing minimally and the population that sparsely uses credit (or net pays off debt) is growing rapidly in the US and among consumer nations.  The natural outcome would not be asset inflation and bull markets...at least not organically.

But in a system where the growth of credit ("money") is necessary simply to pay the interest, only if we look behind the veil could we see how this "bull market" is being made.  To follow through on this point of age based credit creation, I utilize the most recent Federal Reserve Survey of Consumer Finances ( ), detailing the changing situation from 1989 through 2016.  It juxtaposes the young adults (under 35 year-olds), prime aged adults (45 to 54 year-olds), and elderly (75+ year-olds).
Utilization of Debt (Any)
First, the percentage of families, by age of head of household, utilizing debt has been consistent aside for the increased reliance among the elderly. 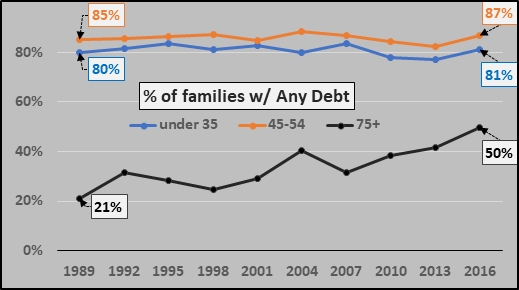 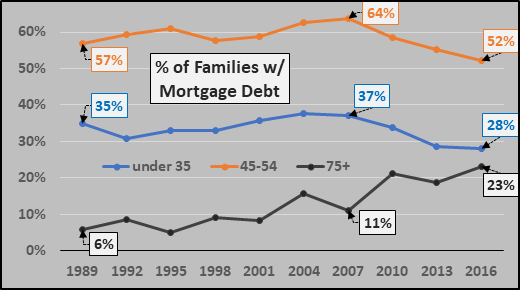 Since 2007, median mortgage debt among those families carrying mortgages (percentages above) has decreased among the young, remained flat among the prime aged adults and elderly (below).  But again, less than half the number of elderly carry mortgage debt, and those that do carry less than half of the working age or young adult populations. 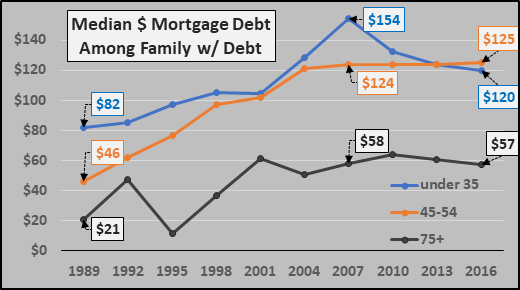 Vehicle Debt
The percentage of families with vehicle debt is fairly consistent among young and prime aged adults, less than half among elderly despite gently rising. 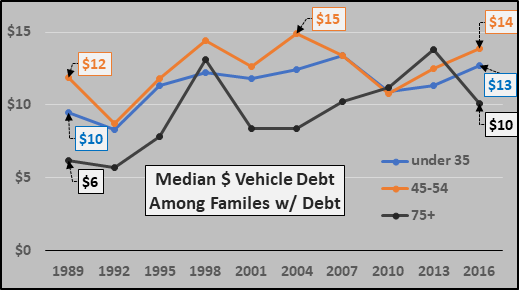 Credit Card Debt
Below, the percentage of families w/ credit car debt, by age groups.  Elderly are almost half as likely to have outstanding credit card debt. 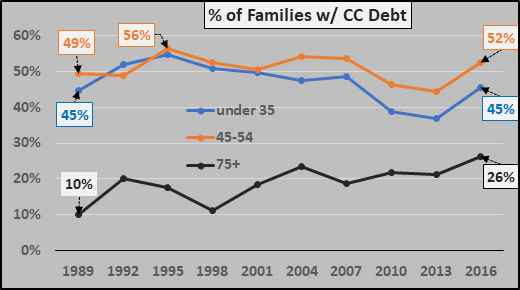 Below, median credit card debt is declining amid all segments except the elderly. 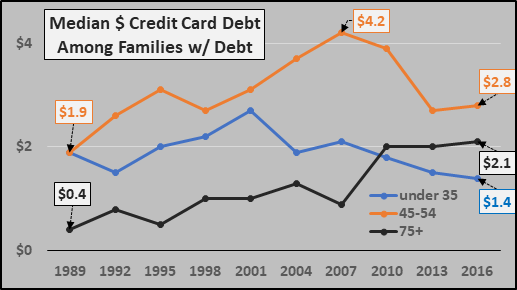 Student Loan Debt
The percentage of young adults and prime aged adults carrying student loan debt continues to crank upward (below).  Of course, the percentage of 75+ year-olds with student loan debt is essentially zero.  Or said otherwise, the primary vehicle for credit creation (money growth) is entirely avoided by the population that is set to experience all the growth for the next two decades!?! 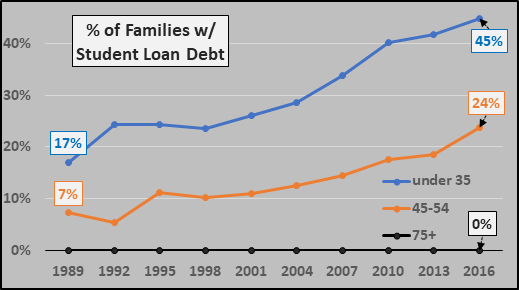 Below, rising median student loan debt among students and their parents that carry student loans.  As for the only population that is set to grow in abundance over the next two decades, the elderly...not so much. 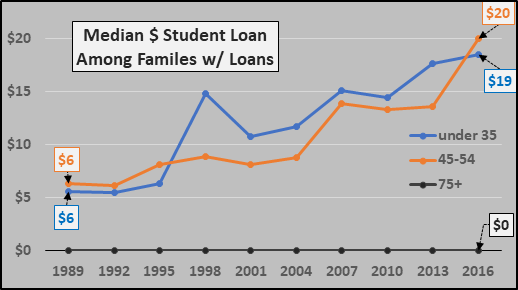 Conclusion:
The very negative organic demographic outcome of a serious review of credit creation and money growth should be plain. But this is where so many have gone terribly wrong and lost gobs of money...in a centrally controlled world, bad is good!  The "badder" the underlying fundamentals, the "gooder" the synthetically driven growth!!!  The worse the organic situation, the more the poor are hammered and the wealthy made wealthier.  The weaker the potential growth of demand, the stronger the rationale for the Fed, central banks, and federal governments to delay the inevitable.  And when I say delay the inevitable, I (nor the Fed or like actors) know if this is a year, a decade, or ???  It is simply an all-in bet with nothing to cover the eventual, inevitable losses.
All population data is via UN World Population Prospects 2019.
Posted by C Hamilton at 12:43 AM