Elon Musk continues to suggest a population collapse is in store within a few decades time...and he is 110% correct if you make two caveats...1) focus on the young and potential child bearing populations and 2) look at the world excluding a single continent...Africa. 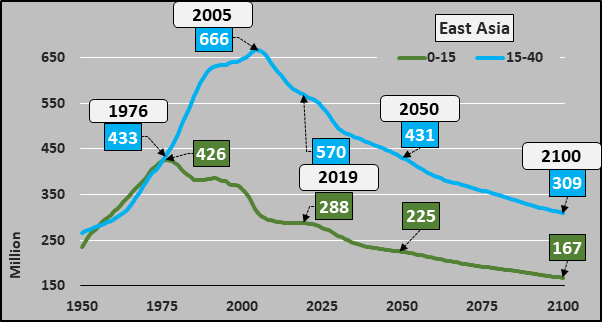 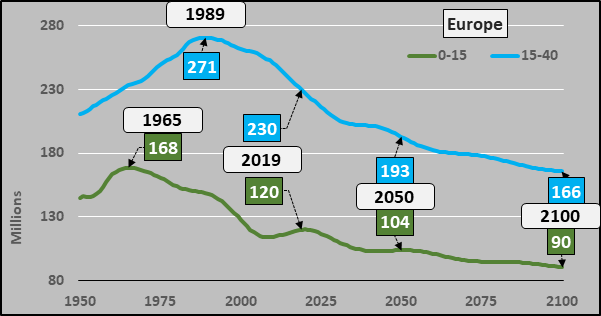 Latin America plus Caribbean (everything in Western Hemisphere but US/Canada) childbearing population (blue line) and young population (green line), below. 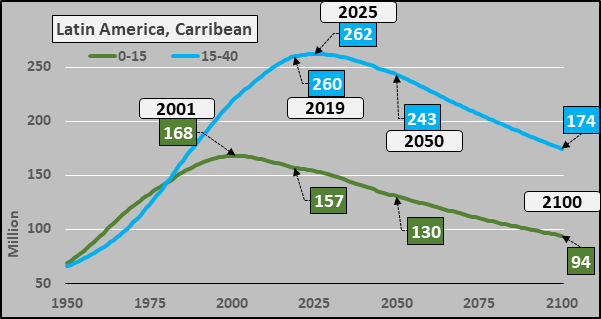 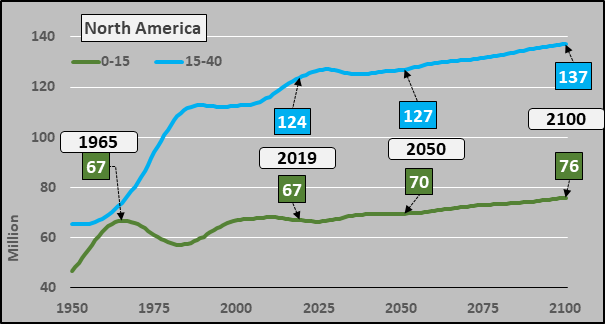 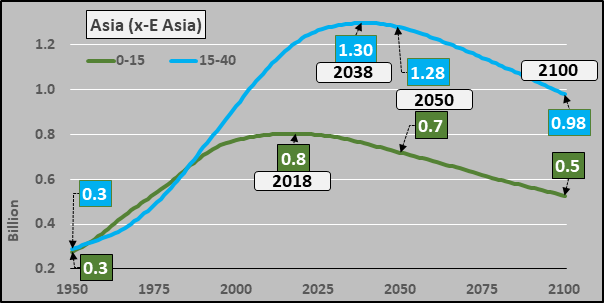 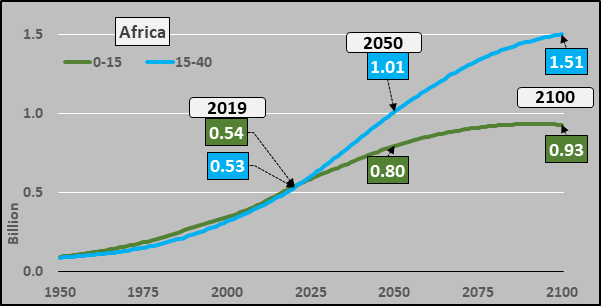 Consider:
That is to say, Africa is all the growth in the childbearing population and births...but with minimal increase anticipated in energy consumption or global economic impact.  There is essentially no transfer mechanism from the first world wealth to the poor of the third world nor is there a strong avenue for emigration.  The global economy will impact Africa but Africa is very unlikely to impact the global economy.  And as the UN noted recently, the end of global population growth is now in sight and the global population is likely to peak around 2100, under 11 billion persons (detailed here, HERE).  The collapse of populations in East Asia, Europe, and Eurasia is already a done deal.

The Big Picture
Annual global population change, excluding Africa, peaked in 1988 and growth has decelerated since.  However, growth really decelerates from here and is projected to end entirely by 2055...and global depopulation (excluding Africa) is the primary global feature there-after. 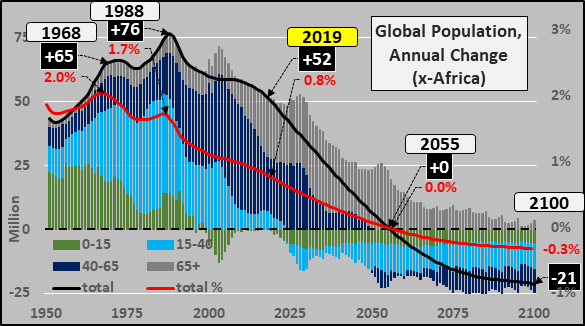 But focusing on the 15 to 65 year old working age population (x-Africa) which drives the global economy and consumption, the halving of growth in millions (and 2/3rds decline in percentage) is already in the rearview mirror.  By 2040, global working age population growth is estimated to end entirely and a persistent decline (depopulation) among potential employees/consumers persists indefinitely there-on. 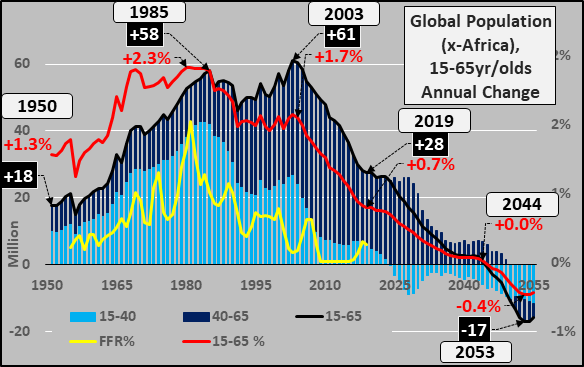 Why point all this out?  Because it is the annual growth in the global childbearing population (excluding Africa, blue columns below) that drives demand, inflation, and the Federal Funds interest rate (yellow line).  From 1950 to 1980, it was the accelerating rise in the childbearing population of potential consumers (above and beyond existing capacity) that pushed prices upward (more demand than supply) just as the Fed was hiking the cost of servicing debt (reducing growth in potential capacity).  Then from 1981 to present, the deceleration of growth among the same population coincided with decelerating inflation (decelerating demand with accelerating supply from lower interest rates).  The imminent declines in the same population will coincide with outright deflation (declining demand against a flat to potentially rising capacity thanks to a return to ZIRP or even NIRP). 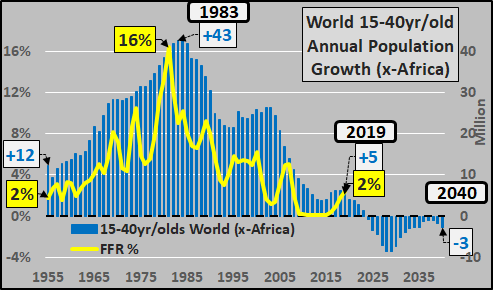 15 to 40 year old population growth (as a %) versus federal funds rate, below. 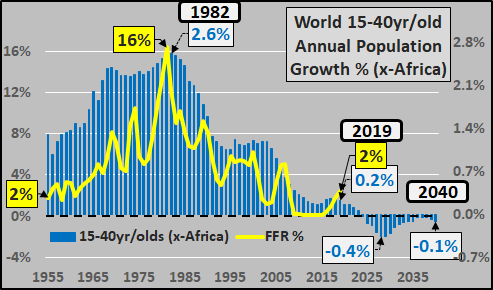 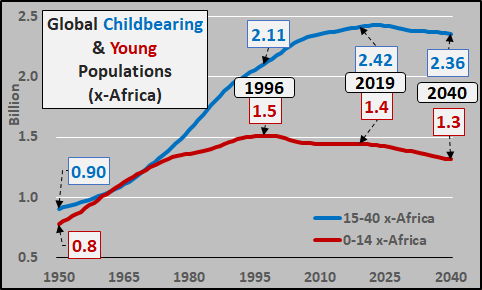 Below, the annual change in the global childbearing population (x-Africa, blue columns) and annual change in the global population of young (x-Africa, red columns) versus the Federal Funds Rate (yellow line).  The shape of the rate curve should make more sense when matched against the real world changing demand of potential consumers.  The rationale for rate cuts, ZIRP, and sooner than later, NIRP should also be clear as we are at the end of population growth driven demand increases.  The onset of secular declines among the nexus of economic activity is inevitable and imminent.  From a growth perspective, the sky has truly fallen...and will only continue to fall faster. 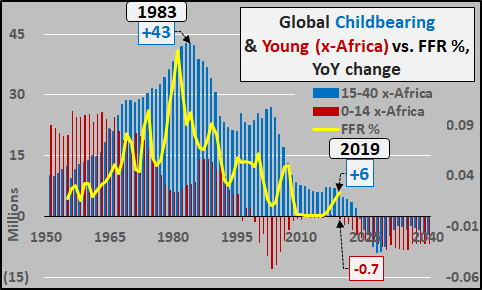 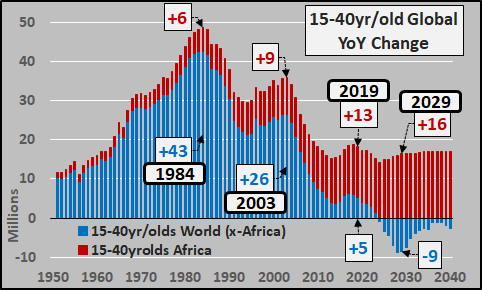 Below, global births annually (excluding Africa, blue line) versus births in Africa (red line).  Global annual births (x-Africa) peaked in 1989 and have declined by 17 million (-15%).  Over the same timespan, annual births in Africa have risen 18 million (+178%).  Trading a poor soul for a relatively wealthy soul (essentially a 1:1 population trade but a 90%+ downgrade in purchasing power) ultimately means global consumption is in big trouble, as rate cuts and debt burdens have reached their full potential. 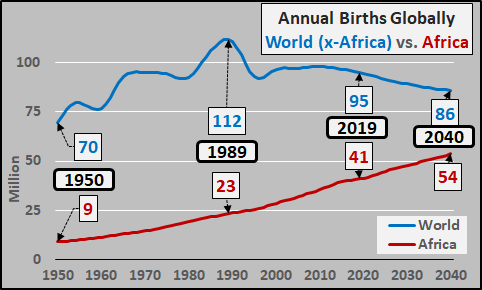 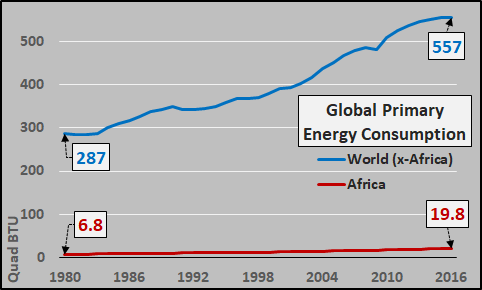 Below, 1980 through 2016, year over year change in global total primary energy consumption.  World consumption (excluding Africa, blue columns) versus Africa (red columns).  The deceleration of global annual growth with little to no offsetting demand growth from Africa is clear. 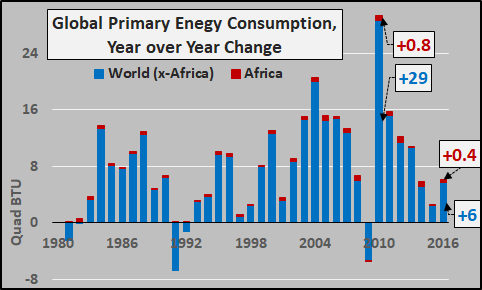 As growth ends among the world (x-Africa) and shifts solely to Africa, the differential and disparity of income per capita between the groups that make up the world versus that of Sub-Saharan Africa doom further economic growth.  The population rise in poor Africans is only offsetting the declining population of the rest of the world.  The chart below details that the average African can consume just 3% what a single high income nation resident would.  The average African can consume just 18% what an upper middle nation resident (China, Mexico, Russia, Brazil, etc.) would...and only 70% what a lower income nation resident (India, Pakistan, etc.) would consume. 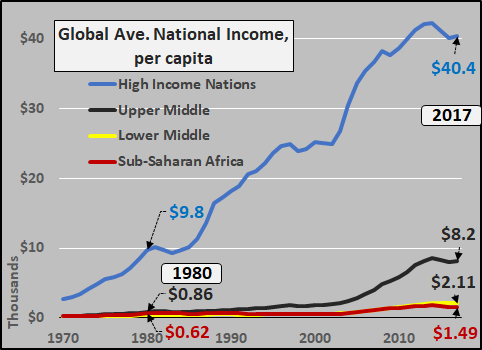 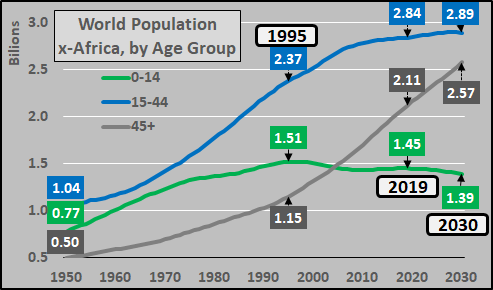 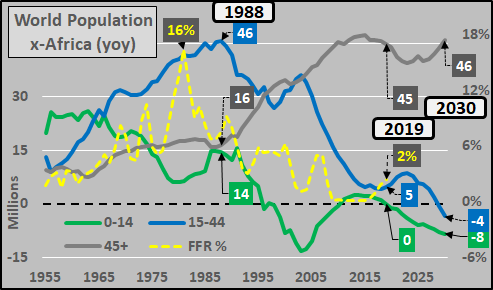 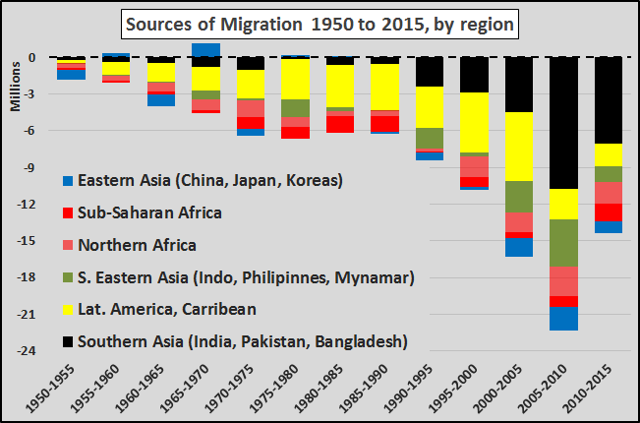 This whole scenario seems to suggest not just a global slowdown is imminent, but an outright collapse in demand, birthrates, and global populations is more likely than not.
Population data from UN World Population Prospects 2019, Migration data from UN 2017 International Migrant Stock; Primary energy data from EIA, GNI per capita via Atlas method, World Bank.
Posted by C Hamilton at 1:01 AM