Summary
I compare the UN World Population Prospects 2019 report (split by the World Bank Gross National Income data) vs. the EIA International Energy Outlook 2017 (showing total global energy consumption).
I show the observed data sets from 1980 through 2018 and projected data sets from 2019 through 2050.
Imminent declines in the wealthier nations consumer populations are sure to mean significantly larger decelerations in Energy Consumption than presently forecast.
The ongoing but decelerating Poorer Nations population growth will not make up the difference.
A large, and likely non-linear, deceleration in global energy consumption appears likely.
Food for thought.  Utilizing data sets, rather than anecdotal evidence, can be helpful when attempting to understand the present and future realities we should anticipate.
Today, I compare the 2019 UN Population Prospects report vs. the EIA (US Energy Information Administration) International Energy Outlook 2017. 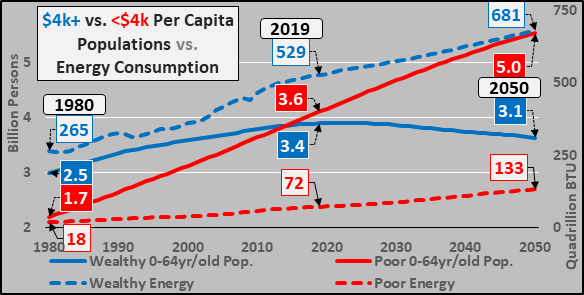 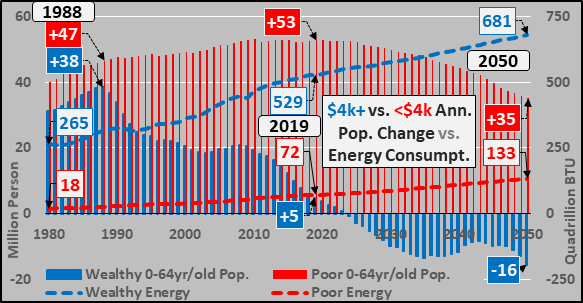 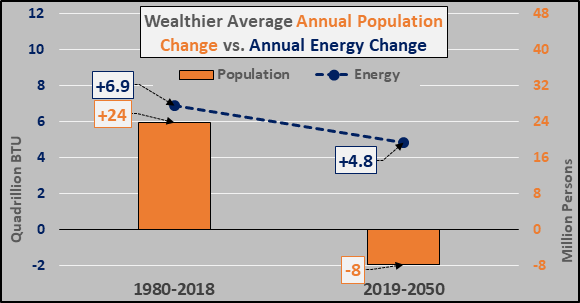 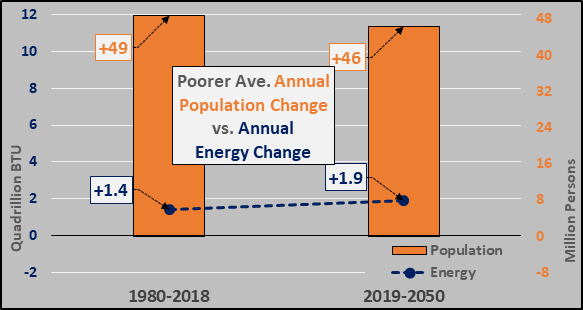 From 2019 through 2050, the consumer of 88% of earths energy, the wealthier nations, are expected to increase their total energy consumption by 154 quadrillion BTU's (+29%) versus a 62 quadrillion BTU increase among the poor nations (+87%).  This is based on an assumption of a 39% wealthy energy consumption increase on a per capita basis...versus a 33% increase on a per capita basis among the poor nations of the world.
The 2019 through 2050 wealthy energy consumption is a very strange projection that wealthier nations will significantly increase their total energy consumption against shrinking workforces, decelerating need for more infrastructure, more factories, more supply chains, etc..  Further, this is strange given continued innovation and conservation efforts in the creation and utilization of energy from all sources. 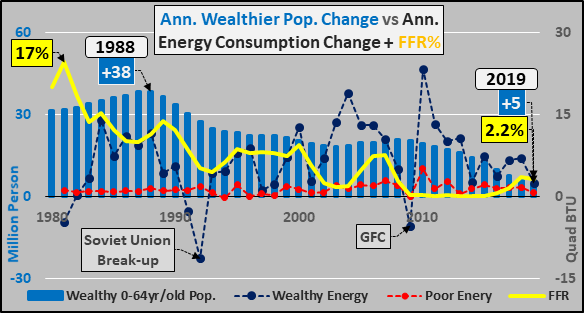 And pulling it all together from 1980 through 2050.  We are now in year 38 of secularly declining federal funds rate to incent greater leverage (debt) to offset the decelerating wealthier 0-65 year-old population growth.  The boom-bust impact on energy consumption of the wealthier nations is apparent as is the relative insignificance of the poorer nations upon the global energy consumption.  Perhaps one more boom-bust cycle is possible based on the imminent implementation of NIRP in conjunction with the latest-greatest stimulus/QE/WTF?!? programs, all in an effort to goose the engine one more time...but I don't think so.

My two cents...is the UN medium variant population data is overstating population growth (and understating population declines among the wealthy nations) and that the EIA International Energy Outlook is somewhere from mildly to wildly overstating energy consumption growth.  With a soon to be shrinking working age consumer base among the wealthier nations who do nearly 90% of the global consuming, the already existing oversupply of capacity will only grow larger.  This lack of demand growth will block the poorer nations from developing and producing further supply.  This lack of global demand will mean little to no export based growth among the poorer nations (no repeat of the "Asian tigers" or anticipated "S-curves" for India or Africa).  As these two data sets are trued up to reality (and one another), the implications for the present and future will be a very different world than is currently being projected.
Posted by C Hamilton at 4:57 PM