Soaring Debt Vs. Shrinking Populations Of Young To Repay Or Service That Debt

Summary
Global debt is currently at $246.5 trillion and primarily in the Wealthier, Consumer Nations of the world.
The population of young in Consumer Nations has fallen 12% or over 100 million Since Peaking in 1975.
Debt on a per capita basis gauged against the consumer nations young is going parabolic.
For nearly a half century wealthy nations young populations have been declining versus rising young among poor nations...offset by secularly declining interest rates and the addition of over $240 trillion in global debt to maintain unnaturally high rates of economic growth.  The consumer nations population of relatively wealthy young has been declining for nearly 4 and a half decades, falling over 100 million or 12% during that span.  The population of relatively poorer nations young has increased by nearly 190% or increased by 570 million.  On average, each wealthier nations young person represents $26.5k in per capita consumption versus each poor nations young represents $1.5k in per capita consumption.  Said otherwise, it takes 15 more poor nations inhabitants to replace the loss of every one wealthier nations inhabitant to simply maintain flat consumption, thus the impetus for interest rate cuts and massive increases in debt among the wealthy.  Obviously, consumption hasn't been flat but has grown tremendously, primarily thanks to interest rate cuts, cheap debt, and only in a very small part from growth in consumption among the poorer nations population gains.

Looking at the same chart but running through 2050, with UN population projections and debt estimated to continue growing at the same pace it has since 1950 (these #'s are inclusive of the impact of immigration and emigration).  Continued declines among the wealthy young consumers, growth among poor young non-consumers, and debt running from the current $250 trillion up to $2.6 quadrillion.  NIRP (negative interest rate policy) will be necessary to enable this sort of wildly irresponsible debt load. 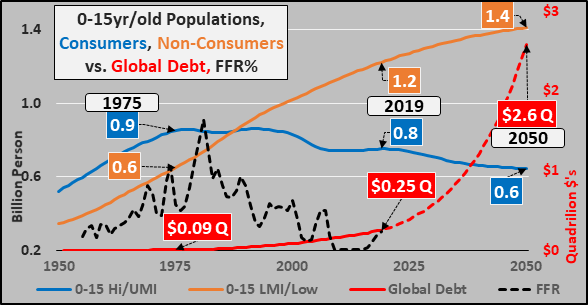 And looking at the debt on a per capita basis of young in the consumer nations, the chart below shows the impressive rise of debt against a long decline in consumer nations young.  As of 2019, the per capita debt is over $334k per youngster.  But that is nothing compared to what is coming...

The chart below takes the UN population projection and estimated global debt through 2050, and drum roll please, by 2050 every consumer nation under 15 year old will be responsible for over $4 million in per capita debt.  That is the magic of surging debt and declining population...and that is entirely unworkable.  There is no possible way to repay or even service this sort of debt load in any free-market based fashion.

And just to round things out, the chart below shows annual changes in the populations of wealthier versus poorer nations under 15 year olds.  Also included is the rising debt, for some perspective on the role of debt in maintaining the growth of consumption. 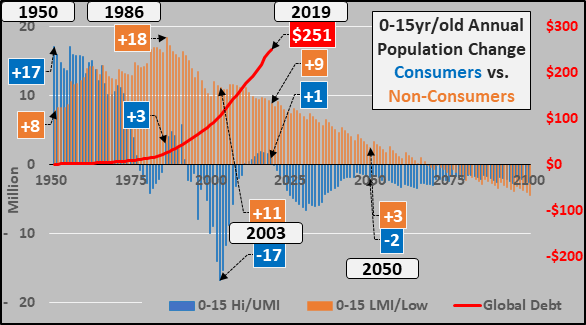 Ok, to really round out the picture, here is the flip side of the equation...the 65+ year old populations of the same groupings of nations. 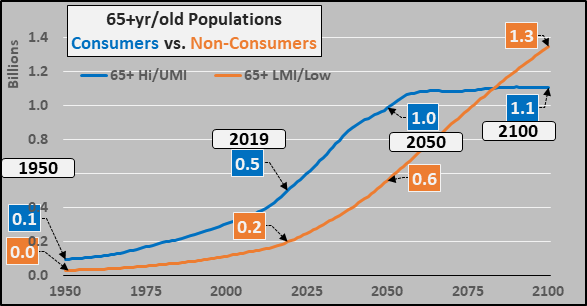 And annual changes in the populations...note the sharp acceleration in annual growth of consumer nations elderly since 2007 and the massive increases still to come.  This isn't even mentioning the unfunded pensions and liabilities due to these elderly. 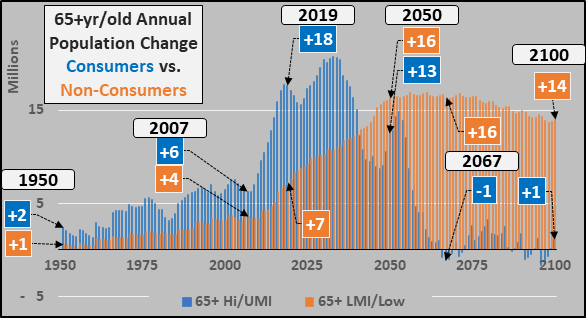 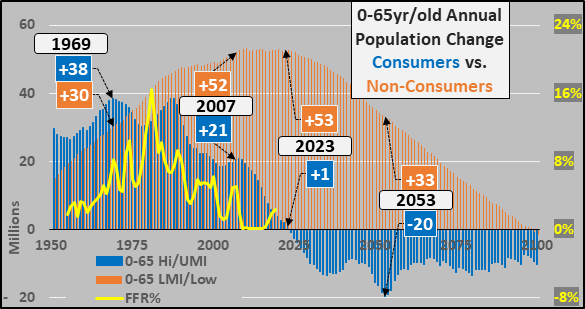